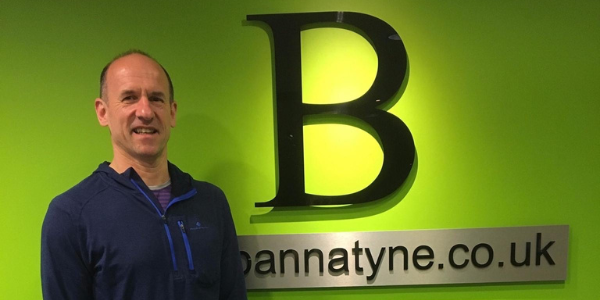 Bannatyne member from Falkirk takes on a marathon

A Falkirk man, whose granddaughter had a kidney transplant when she was two, is competing in challenging sporting events to raise money for a charity that supported her and her family.

Rob Gauld’s granddaughter Ruby Simpson was born in November 2017 and ten days later was admitted to the Paediatric Intensive Care Unit at the Royal Hospital
for Children at Glasgow (RHCG) with renal failure.

She was in hospital about six months where she had two operation operations, before going home with a dialysis machine.

Ruby, who had a kidney transplant in July 2020 and is doing well, has coped with hospital stays, clinic visits, and medications.

Rob said: “All the family are very humbled with the way she just gets on with things.”

A member of Bannatyne health club and spa Falkirk, Rob has been doing regular training there to get to peak fitness in preparation for two marathons and an Iron Man challenge. He is raising money for Kidney Kids Scotland and so far, has attracted more than £2,400.

Rob, a 56-year-old Pilates instructor and personal trainer, said: “Without the doctors and nurses at RHCG, and specifically ward 3C, Ruby wouldn’t be here. Without
Kidney Kids Scotland’s support of the unit, it would be a different story.

“Words cannot express my thanks for everything they have all done for Ruby and her mum and dad – my daughter and son-in-law - Chloe and Danny.”

Rob, who lives on the outskirts of Falkirk, had planned to carry out his fund-raising endeavours in 2020, but his plans were thwarted by the Covid pandemic.

Now restrictions have been lifted, he is back on track. He completed an Ironman challenge in Austria on July 3 and is due to run a marathon in Lisbon in October. He
will take part in another marathon early next year as his final charity challenge.

Rob added: “I set myself the challenge in order to raise funds for Kidney Kids Scotland so they can continue the great work they do in supporting all the families
and the unit.

“Their work, and that of the staff at the unit, truly is life changing. Their care and kindness were invaluable in helping Ruby and her mum and dad cope during an
incredibly difficult time in their lives.

“Kidney Kids for Scotland provides so much support – there is always someone there at the end of a phone, it can help families financially if need be and helps
supply vital life-saving equipment to hospitals across Scotland.”

He uses all the facilities at the site including swimming, cycling, and exercising in the gym and is there for several hours, six days a week.

Staff also have helped create specific fitness programmes to ensure Rob is in tip top condition for his charity challenges.

Paul Lewis, general manager at Bannatyne health club and spa Falkirk, said: “We are so pleased that Ruby got a kidney transplant and has made a good recovery.

“Rob puts an amazing amount of effort in at the health club to get fully fit for the Ironman and marathons to raise money as a thank you to a charity that has been so
supportive to his family in their time of need.

“Kidney Kids Scotland providing much-needed equipment and funding for the RHCG is a lifeline to so many youngsters and their families. Everyone at the health club wishes Rob well in his fundraising efforts.”

Kidney Kids Scotland, which was set up in 2000, is the only Scottish charity supporting children with renal urology illness and their families.

It helps hospitals across Scotland by supplying vital equipment and funding essential posts. Its main support goes to the RHCG, which is a centre of excellence for
children with renal illness. It is the only hospital in Scotland to perform paediatric haemodialysis and transplants with Kidney Kids Scotland having provided nearly
every haemodialysis machine at the hospital