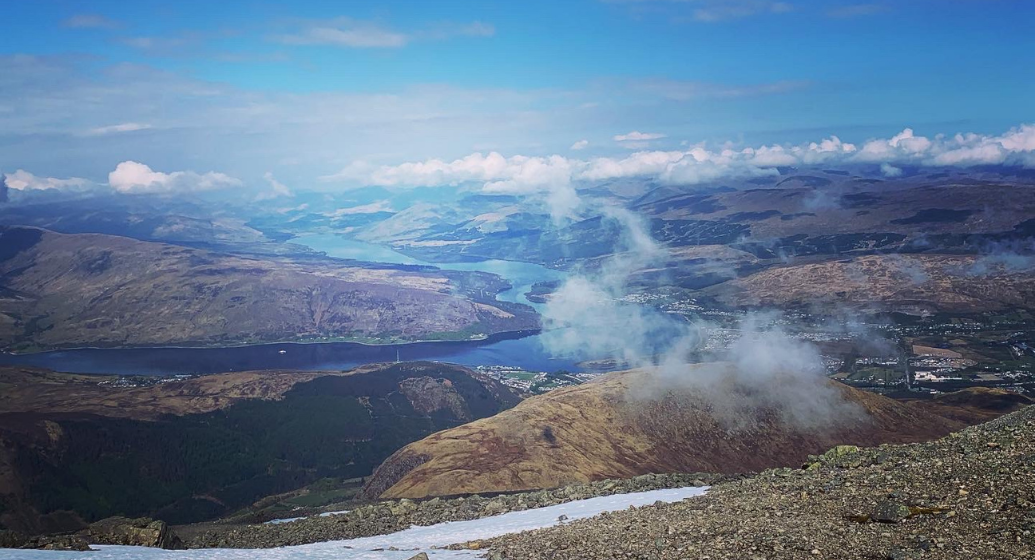 We love to hear about the gruelling challenges our members undertake in their spare time! Fairfield member Ross Marshall recently took on the 3 Peaks Challenge with his friend Mark.

Ross has shared his story with us:

“A friend of mine randomly announced on social media that he was feeling spontaneous, and decided to do the 3 Peaks Challenge (Ben Nevis, Scaffel Pike, and Snowdon within 24 hours, including driving etc) and asked if anyone wanted to join him? Being the adventurer that I am, I jumped at the chance.

“A few days after signing up to the challenge, myself and my friend, and colleague, Mark, set off to Scotland to begin our spontaneous lunacy.

“We began the ascent of Ben Nevis at 07:00 Saturday May 15, after a long slog, an hour of which was through deep snow, and a run back down the mountain, we completed stage one in 4 hours 30 minutes.

“We then drove south to Scaffel Pike in Cumbria, and began the dark and misty trek upwards at around 17:00. The weather was damp and we fortunately descended just before dark. We made it back in 3 hours 33 minutes.

“At 21:00 we hit the road south to Snowdonia, Mark drove and I got a couple of hours rest. After a couple of logistical challenges, we finally set off on the Miners Path on Mount Snowdon around 03:15 Sunday morning. We were very tight for time, however, we bashed on optimistically... Snowdon however, had other plans.

“The mountain bared her teeth, and we were met with utter darkness, torrential rain, and icy wind. My legs and back were really seizing up but we had to go on! By the time we made it to the summit. I was a broken man but had made it.

“Timing wise we were too far behind schedule to break the 24-hour goal, so we just marched anyway, and tried to soak up the views on the way down. We eventually made it back to our vehicle in 6 hours 6 minutes, bringing our total challenge time (including driving) to 26 hours and six minutes.

“My friend Mark wanted to raise awareness for Oddballs men’s charity, so he and myself braved the elements in our underpants when we reached the summits.

“All in all, it was a great challenge. However, I definitely needed the deep tissue massage, some spa time, and as much sleep as I could get.

“Big shout out to Bannatynes staff for giving me a deep tissue massage on my return... I really needed it!”