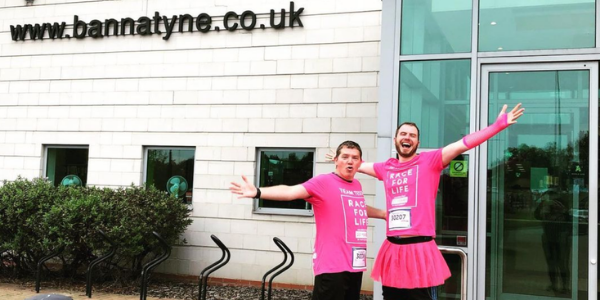 Norwich are getting dirty to raise money for Cancer

One of our colleagues has taken part in Norwich Pretty Muddy 5K, to raise money for Cancer Research UK.

Craig Cluley who is a class instructor at Bannatyne Health Club in Norwich took part in the event on the 17th of October.

The Norwich Pretty Muddy 5K is one of the many events Cancer Research do every year to raise much needed fund and awareness. The charity was founded in 2002 and requires £634 million annually to continue its world leading research into the cause of cancer and new treatments.

Craig has been taking part in fundraising events for Cancer Research UK for some time after losing his step-dad, John to the awful disease. John had a long battle with Non-Hodgkin Lymphoma and was given the all clear before his 42nd birthday. However, he was later diagnosed with an incurable brain tumour, sadly passing away in March 2004.

Craig said, “Cancer doesn’t care who you are, so the more we all do to raise money for research to prevent this horrible disease the better! My stepdad is the reason I ran and will continue to run the race for life. John may have only been in my life a short period of time, but he was the only man in my life I’ve ever called Dad.

If anyone would like to support them both, please visit his Just Giving page.
https://fundraise.cancerresear...