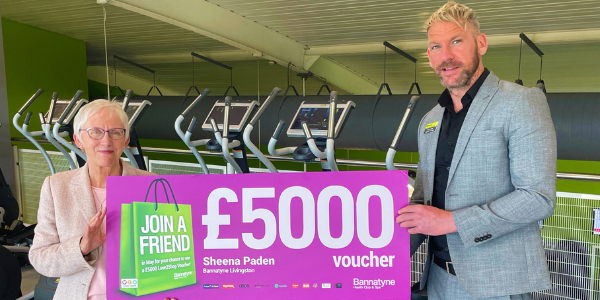 Livingston member announced as our May referral winner!

Livingston resident Sheena Paden couldn’t believe her ears when she heard she had won a Bannatyne health club competition prize of a £5,000 shopping voucher.

Members of the health club, in Charlesfield Road, Adambrae, who introduced a new member in May were eligible for entry into the fantastic prize draw.

Sheena joined the club a few months ago after exercising in a pool was recommended to help ease her back problems.

Since then, the 72-year-old, who is retired, tries to visit the club three times a week involving two aqua aerobic classes and a swim in the pool. She also loves to have a bite to eat in the health club’s café.

Sheena, who joined her daughter Susanna, who also lives in Livingston, said: “I thought I had heard incorrectly when I was told I had won £5,000 of shopping vouchers. I am so excited about it as I never win anything.”

She added: “There is a great ambience at the club, the staff are very pleasant and the facilities, including the café, which serves good food, are first class.

“After Covid, I find the atmosphere at Bannatyne Livingston very relaxing, and I really enjoy the company of people in the classes.

“I told my daughter how much I loved going to the health club and she decided she too would like to be a member.”

“We hope she enjoys spending the voucher and look forward to hearing all about what she decides to treat herself to.

“We are delighted how much she loves the atmosphere and companionship at Bannatyne Health Club Livingston and that she recommended us to her daughter,
whom we have been pleased to welcome to the club.”

The prize in the Join a Friend scheme comprised a £5,000 Love2Shop voucher, which can be spent on more than 150 brands including Amazon, Argos, John Lewis,
Love2Shop Holidays, Currys PC World, and B&Q.

Susanna, 47, has become a regular swimmer at the club and currently is deciding which classes and other areas of the gym’s fitness facilities she will use.