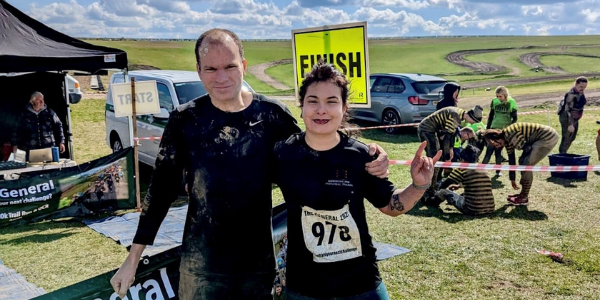 Carmen and Stuart from Bannatyne hastings

A fitness adviser and member at the Bannatyne Health Club in Hastings have set themselves a gruelling challenge to raise money for a military veterans' charity.

Carmen Korkis, 22 is teaming up with member Stuart Dawkins to take part in the Cateran Yomp, which is described as the 'biggest and toughest event of its kind' in June.

In aid of ABF The Soldiers' Charity, it is being staged in the foothills of the Cairngorm Mountains in Scotland with teams battling to complete 54 miles in 24 hours across the wilderness's rugged terrain.

Everyone taking part has been set a target of raising at least £400 each for the charity, which supports veterans, ex-military personnel and their families.

Carmen, who has worked at the club for three years, has been inspired to take part as she has close friends who have floundered, both mentally and physically, after leaving the Army. This includes one who attempted suicide.

She said: "I have seen first-hand how ex-Army personnel can struggle after leaving the service.

"Mental health support for soldiers isn't cheap, but it is necessary to fight the trauma they have been through and allow them to get back to ''normal life'' after everything they've seen.

"ABF The Soldiers' Charity offers a wide range of much-needed support and it is important it has the necessary funds to carry out its fantastic work."

Stuart, who has been a member at Bannatyne Hastings for more than ten years, been doing exercise routines and sessions to help build up his stamina and ensure he is physically and mentally ready to be involved in the challenge.

He and Carmen, who both live in Hastings, are training up to seven times a week in preparation.

He is cycling and Carmen teaches spin classes four to five times a week.

On top of that, they run five times including long hills climbs of 2,000 feet per 13 kilometres and one long endurance run, which currently is 20 miles, but will increase as the challenge approaches, and strengthening/conditioning training once a week.

Stuart, 52, said: "Carmen helps to motivate me and push my fitness goals to new heights. When I first approached her at the club for training advice and support, I hadn't run further than 5k - I can hardly believe what I now am able to do, including completing half marathons, and what I intend to do.

"We both are really spontaneous and love to set ourselves new challenges, so when Carmen told me about the 54-mile Cateran Yomp it made sense for me to join her.

"It is going to be a tough challenge, but I am sure we will feel a fantastic sense of achievement once it's over. And, in addition, we will be raising money for a really worthy cause."

Dan Murphy, general manager of the Battle Road health club, said: "We love it when members and staff get involved in initiatives that benefit the wider community.

"We have quite a number of members who have connections with the Armed Forces, so this charity is one that is close to all our hearts. We wish Carmen and Stuart the very best for what will be a challenging event, but one that I am sure they will complete with flying colours."

ABF The Soldiers’ Charity is a national cause that is there for soldiers, past and present, and their families for life.

Last year it supported 60,000 people in 63 countries around the world. As one of the largest funders in the sector, it awards grants to individuals and families, and funds leading organisations that support soldiers, former soldiers, and their families.

It offers support in six key areas: independent living, elderly care, education and employability, mental fitness, families and housing. When it hears of a person or family in need, it aims to respond within 48 hours.

To donate to either Carmen or Stuart visit: